How can I break free from a war that was over before I was born? Together with Arnoud Holleman, Batya Wolff approaches her father through the media of film and photography. Max Wolff began taking photographs immediately after the end of the war in order to keep the trauma of survival at bay and establish his own narrative. Thousands of photos and many hours of film make up the family archive, which itself evolves into the third protagonist of the film alongside father and daughter. It testifies to how images can simultaneously conjure up and block memory.

Betya Wolff, Director’s Statement: “His camera always had a negative presence for me and my two sisters. Our family archive contains thousands of photographs of us, "captured" as part of our father's attempt at a self-representation of history. Ten years ago, I switched roles and started filming my father. I wanted to change the dynamics within our family and gain a better understanding of his dependence on photography as a coping strategy.” (Amsterdam 2021)

Arnoud Holleman, Director’s Statement: “CAPTURED narrates a Jewish (post-war) story and at the same time a universal story about perspectives, as well as about how one deals with images, a very topical issue in contemporary visual culture. We see two protagonists engaged in their individual and separate struggles to deal with the trauma of the Holocaust. Father Max fights against the memories of what he actually experienced, whilst daughter Batya struggles with the legacy of this past, full of death and destruction, in the face of which she is ultimately powerless.” (Amsterdam 2021) 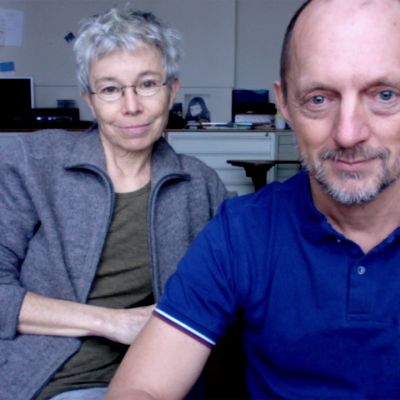 BIO Arnoud Holleman is a visual artist, writer and filmmaker – with a focus on the fluid relationship between images and meaning. His work is included in the collections of the Stedelijk Museum Amsterdam and the Frans Hals Museum in Haarlem. For VPRO television he directed documentaries and drama series. He teaches at the Sandberg Institute in Amsterdam.

BIO Batya Wolff has been working as a program and exhibition maker for the Jewish Museum in Amsterdam and as a researcher and scenarist for filmmaker Frans Weisz. For photo exhibitions she made film portraits in which photographs always formed the occasion for personal memories and stories.