Cheering people give flowers to the German tank soldiers during the invasion of Ukraine in the summer of 1941. Pogroms against the Jews take place in Lviv. In Kyiv, the Germans murder 33,771 Jews in two days in the Babi Yar ravine. Sergei Loznitsa assembles archive footage, classifies the massacre, and ends with images of the public execution of German perpetrators and the filling in of the ravine in Soviet times. The result is a shattering collage of images against oblivion.

One of the most shocking crimes committed against Soviet Jews was that of German forces, working in collaboration with local police units on September 29 and 30, 1941 in the ravine of Babi Yar. There they shot dead 33,771 Jewish men, women, children, infants and elderly people. With the help of German and Soviet archive footage, director Sergei Loznitsa places the horrors of Babi Yar in a historical context that covers a period from 1941 and 1952. In the middle of the film, by means of a text panel, he quotes the sorrowful prose of Vasily Grossman's 1943 article

Ukraine without Jews
"In the Ukraine there are no Jews. Nowhere: not in Poltava, Kharkov, Kremenchug, Borispol, not in Iagotin. You will not see the black, tear-filled eyes of a little girl, you will not hear the sorrowful drawling voice of an old woman, you will not glimpse the swarthy face of a hungry child in a single city or a single one of hundreds of thousands of shtetls. Stillness. Silence. A people has been murdered." 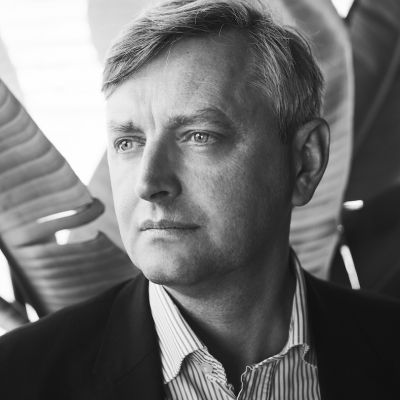 BIO Script writer/Director/Producer Sergei Loznitsa was born on September 5th 1964. He grew up in Kyiv (Ukraine), and in 1987 graduated from the Kyiv Polytechnic with a degree in Applied Mathematics. In 1987-1991 Sergei worked as a scientist at the Kyiv Institute of Cybernetics, specializing in artificial intelligence research. In 1997 Loznitsa graduated from the Russian State Institute of Cinematography (VGIK) in Moscow, where he studied feature filmmaking. Sergei Loznitsa has been making films since 1996, and by now he has directed 22 award-winning documentaries and 4 fiction films. Loznitsa’s feature debut “MY JOY” (2010) premiered in the main competition at the Festival de Cannes, and was followed by the feature film “IN THE FOG” (2012), which was awarded FIPRESCI prize at the 65th Festival de Cannes. In 2017, Sergei Loznitsa presented his third feature “A GENTLE CREATURE” in the competition of the Festival de Cannes. In 2018, Loznitsa received the prize for Best Directing of the Un Certain Regard section of Festival de Cannes for his fourth feature film, “DONBASS”. In 2013 Sergei Loznitsa founded a film production company ATOMS & VOID. Sergei Loznitsa’s feature-length documenatry “MAIDAN” (2014), the chronicles of the Ukrainian revolution, had its world premiere at a Séance Special of Festival de Cannes. His subsequent feature length documentaries, “THE EVENT” (2015), “AUSTERLITZ” (2016), “THE TRIAL” (2018) and “STATE FUNERAL” (2019) were presented at the Special Screenings of the Venice Film Festival. Sergei Loznitsa continues to work both in documentary and feature genres.