Sharon is Jewish and a third generation Shoah survivor. When, after seven years of silence, her father gets in touch with her again, she begins to scrutinise the family’s complex relations. In the process questions are also asked of her non-Jewish environment and the ways in which a shared past is processed in this dialogue-embracing documentary that openly broaches uncomfortable questions.

“In DISPLACED I wanted to confront my relationship with Germany and my father's family history offered me the framework within which to do this. The film was a chance for me to take an in-depth look. I had always known that the gap between the Jewish and non-Jewish discourses was enormous.” (Sharon Ryba-Kahn) 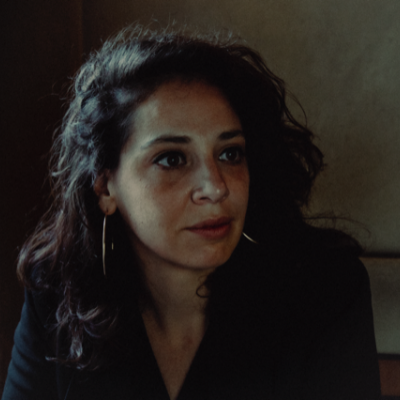 BIO The French-Israeli director was born in Munich in 1983. Sharon spent her first 14 years in Munich before moving to Jerusalem in 1997. After directing and acting in several theater productions, she continued her education at NYFA and studied film production. In 2007, she moved to Berlin and began working as a freelancer in the film industry as a casting director, A.D. and voice actor. Her first feature-length documentary RECOGNITION was released in 2015 and screened at over 20 film festivals worldwide. In Israel, it premiered at the Jerusalem Jewish Film Festival in December 2015, was shown in a special screening at the Cinema South Film Festival in Sderot in 2016, and screened again at the Tel Aviv Cinematheque. In Germany, RECOGNITION (German title: HAKARA) had a brief theatrical distribution in 2017. To hone her craft as a director, Sharon applied to Babelsberg KONRAD WOLF Film University and was accepted into the prestigious MA program in Documentary Directing. During her master's program, Sharon realized three short films and her graduation film DISPLACED which was produced by the renowned production company TONDOWSKI FILMS. The film successfully celebrated its world premiere during the Covid 19 pandemic at DOK.fest Munich (online). DISPLACED was also nominated for the First Steps Award in the documentary category and will be released in German cinemas in 2021. Sharon is currently working on an artistic-scientific dissertation at the Babelsberg Film University and is an ELES Research Fellow (Ernst Ludwig Ehrlich Studienwerk). In addition, she is working on her feature-length documentary LOVE TILL 120, an Israeli-German co-production, for which she received a grant from the "Zurückgeben" Foundation.