A touch of Woodstock: Back in the 1970s, volunteering on a kibbutz in Israel sounded like an enticing adventure to many a youngster from the West, and yet the ideals of community and physical labour in the country soon degenerated into sex, drugs and rock ‘n’ roll. This is the story of the rise and fall of a volunteer movement.

Around 350.000 volunteers worked on kibbutzim across Israel. From the late 1960s, many young people flocked in droves to the communes: from Great Britain, Latin America, Germany and Scandinavia, as work tourism found itself transformed into a business model. Once out in the fields these volunteers from all over the world experienced a sense of community. Love affairs developed, often transcending national and religious borders. The kibbutzniks taught the newcomers about life in the commune; in turn, the young foreigners brought a touch of Woodstock to Israel. The model experienced a gradual decline in the 1980s: Hedonism, fear of infiltration, as well as the exploitation of cheap labour and the Middle East conflict all caused the movement to lose momentum. Drawing on vivid testimony from participants and archive materials, director Yoav Brill narrates the story of this most remarkable chapter from Israeli history. 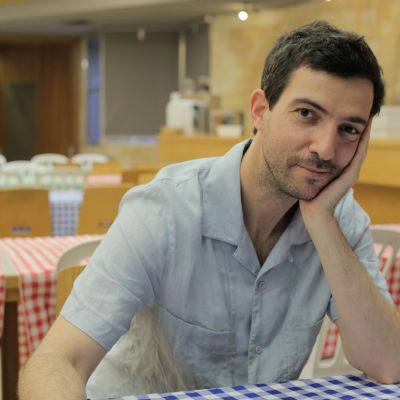 BIO Yoav Brill, 40, is an animator, filmmaker and musician, who has created pieces both for exhibitions and for the big screen. "Ishihara”, his graduation animated film for the Bezalel Academy, won first prize in the Haifa Film Festival (2010). “Hora”, a short animated documentary, won first prize in the Tel Aviv Animation Festival (2014). Both were nominated for an Iris Prize in Cardiff’s LGBT film festival and were screened in over 30 International festivals. His recent short film was presented in 2019 in the Israel Museum in Jerusalem. Brill took part in animating several Israeli documentaries such as “King Bibi” (Dan Shadur, 2018) and the Oscar shortlist nominee “Advocate” (Philippe Bellaiche and Rachel Leah Jones, 2019). In 2015 he was chosen to participate in the prestigious ART OMI residency in upstate New York. Currently he is working on a new animation - a dark comedy about a week in the life of a museum guard.